Vision of the future: Marshside owners promise tradition with a new view

From The Register
By: Nicole Muller

DENNIS – A family from Norwell already has a reservation for opening night next spring. Jay Gordon will continue to feed the birds early each morning before the Marshside Restaurant in East Dennis opens for breakfast – and the boys at table 13 will have an even more spectacular view of the Sesuit Creek marsh.

Matt, Bentu, Rory, Jose, Chris, Duval, Jane, Maui, Marylou, Bri, Rebecca, Chrissy, Megan, Linda, Kristin, Lindsey and Andrew – many of whom have worked at the Marshside since it opened in 1985 – will return, after a long vacation. “We’ve been open every day except Thanksgiving and Christmas for breakfast, lunch and dinner for 22 years,” says Marshside owner Marylou Robinson, who with her business partner Jack Connors decided to build a new restaurant that is fully handicapped accessible. The former building, constructed in the 1920s, was failing.

When customers begged Robinson not to change the Marshside, she reassured them it will remain the same rustic place it’s always been, serving the same menu with some new additions. Local graphic artist Stephen Drowne, a fixture at the Marshside since he was a child, is designing a new menu cover with a local theme.

All 120 seats will have a spectacular view of the marsh. “The whole back and side will be windows,” Robinson says. “We have a decorator who will create a rustic milieu of browns and greens.”

Robinson and Connors believe it’s critical to stay up-to-date as they grow their business, so in addition to more seating, better views and handicapped accessibility, brick walkways and new landscaping will enhance the new restaurant. “It will be a wonderful entranceway to Sesuit Neck and the harbor,” Robinson says. Connors adds, “The Marshside will remain the classic neighborhood joint, both beautiful and comfortable. What’s on your plate will be enjoyable but not expensive or fancy.” Connors doesn’t expect the Marshside’s style to change from the days when three of his four children, now parents themselves, worked there.

On Aug. 26, when Robinson’s crew served the last dinner until the new restaurant opens in May, customers and staff laughed, cried and hugged each other.

“Our customers have become part of our family. You can come in by yourself and feel welcome,” Robinson says. “Everyone knows Priscilla Waters, who came in almost every day for dinner on the porch. Two women from Plymouth came down for lunch every Saturday. I hardly go anyplace where, if I say I own the Marshside, people haven’t eaten there.” Locals know that the late marathoner Johnny Kelley was a regular at the Marshside for years.

Because everything from curtains to salt-and-pepper shakers will be brand new, customers on the last night were invited to take what they wanted as mementos. “The Ashworths come from London every year,” Robinson says. “We had 14 Tiffany lights, and they took two back with them to have a piece of the Marshside back home.” From the clock to tablecloths, free Marshside memorabilia provided a salve to the sadness many felt at the loss of the old building.

In 1947 Phil Dubin, a pharmacist from Arlington, purchased the building on the Old King’s Highway, believed to have been built in the 1920s, that still had the Flaherty’s Store sign hanging over its door, and converted it into Players Pharmacy. Locals called the place Dubin’s Drug Store and describe it as the place you could fill a prescription, order a sundae at the soda fountain, buy motor oil and tires or call a friend in the days before every home had a telephone.

“One time, when the playhouse was different, my father sold a full line of theatrical makeup,” says Ira Dubin of East Dennis. During the winter of 1963-1964, the pharmacy building was moved to Dubin’s property around the corner on Bridge Street, and the Dubin family built Players Plaza on the corner of Route 6A and Bridge Street. In 1964, Phil Dubin retired and his son Mike Dubin took over as the pharmacist at the new shopping plaza. Over the years, the building that in 1985 became the Marshside Restaurant, housed a deck company, a marine-sales shop and Nick Mazzoni and Richie Reeves’ restaurant, the Marshside. “In 1983, Mazzoni and Reeves sold it to the Grants, who operated the restaurant for a year,” Robinson says. “We bought it in 1985 and have operated it year-round ever since.”

“The best bread basket I ever had. Everything was excellent from service, view, food and company.” ~ Jaya P.

Located in East Dennis, MA overlooking scenic Sesuit creek, The Marshside offers a casual dining experience for the whole family. Our menus include only the freshest seafood, meats, salads and breads baked on-site.

Purchase over the phone or at the front desk. 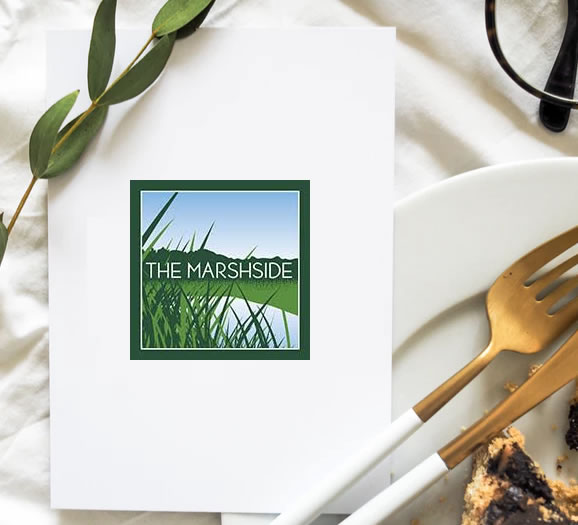 Ask for one during your next visit!